Six Characters in Search of a Play by Del Shores

Sordid Lives creator Del Shores new one-man show directed by Emerson Collins proves once again that he is not a writer, he’s a self-proclaimed thief! In Six Characters In Search Of A Play, Shores is inspired by Pirandello’s classic play to bring you six characters inspired by his real-life encounters that haven’t quite made it into one of Shores’ plays, films or TV shows.
In 90 minutes, the audience will hear the truth behind how he collected these eccentrics, then he will portray them in classic Shores’ monologue style. The audience will walk away knowing “Yvonne”, the vegetarian-hating Texas waitress; “Sarah”, an elderly actress who is determined to drink and smoke herself to death if Trump is elected; “Jimmy Ray”, the evolving Georgia redneck, “Loraine”; the once brilliant drama teacher who has lost her damn mind and is now obsessed with porn; “Aunt Bobbie Sue”, the blue-collar Republican who does not care for “Mexkins” or Obama; and “Marsha”, the monkey-hating lesbian with CPOD.

Get ready to laugh, think and maybe shed a tear or two.
?
Del Shores has written, directed and produced successfully across studio and independent film, network and cable television and regional and national touring theatre.

Shores’ career took off with the play Daddy’s Dyin’ (Who’s Got The Will?) in 1987, which ran two years, winning many Los Angeles theatre awards, including LA Weekly’s Best Production and Best Writing. The play has subsequently been produced in over 2,500 theatres worldwide. A movie version of Daddy’s Dyin’ was released in 1990 by MGM starring Beau Bridges, Tess Harper, Judge Reinhold, Keith Carradine and Beverly D’Angelo. Shores wrote the screenplay and executive produced the film.

Sordid Lives, his fourth play, opened in Los Angeles in 1996 and ran 13 sold-out months. The play went on to win 14 Drama-Logue Theatre Awards, including three for Shores for wring, directing and producing. There have since been over 300 additional stage productions of the play.

In 1999, Shores wrote and directed the film version of Sordid Lives starring Beau Bridges, Delta Burke, Olivia Newton-John, Bonnie Bedelia, Leslie Jordan and Beth Grant along with most of the cast from the play. Opening in only eight theatres across the country, the little film that could took in nearly two million dollars in its limited release. The movie became a cult phenomenon and became the longest running film in the history of Palm Springs with a record ninety-six weeks.

“Del Shores is a master of the Texas comedy.”
— Los Angeles Times

“A storyteller of quirky Bapto-Gothic sensibilities, Del Shores solo show Six Characters in Search of a Play is both specific and universal in its quest to help us understand humanity, from family to fandom, with compassion and heart, all wrapped up in a quilt of homespun hilarity.”
— Arnold Wayne Jones, Dallas Voice
?
“Chock-full of feeling… the stories are hilarious, eliciting “AMENS” and laughter”.  We meet each of the characters, their unique qualities brought to life before our eyes.”
— John Strange,  Selling Film News 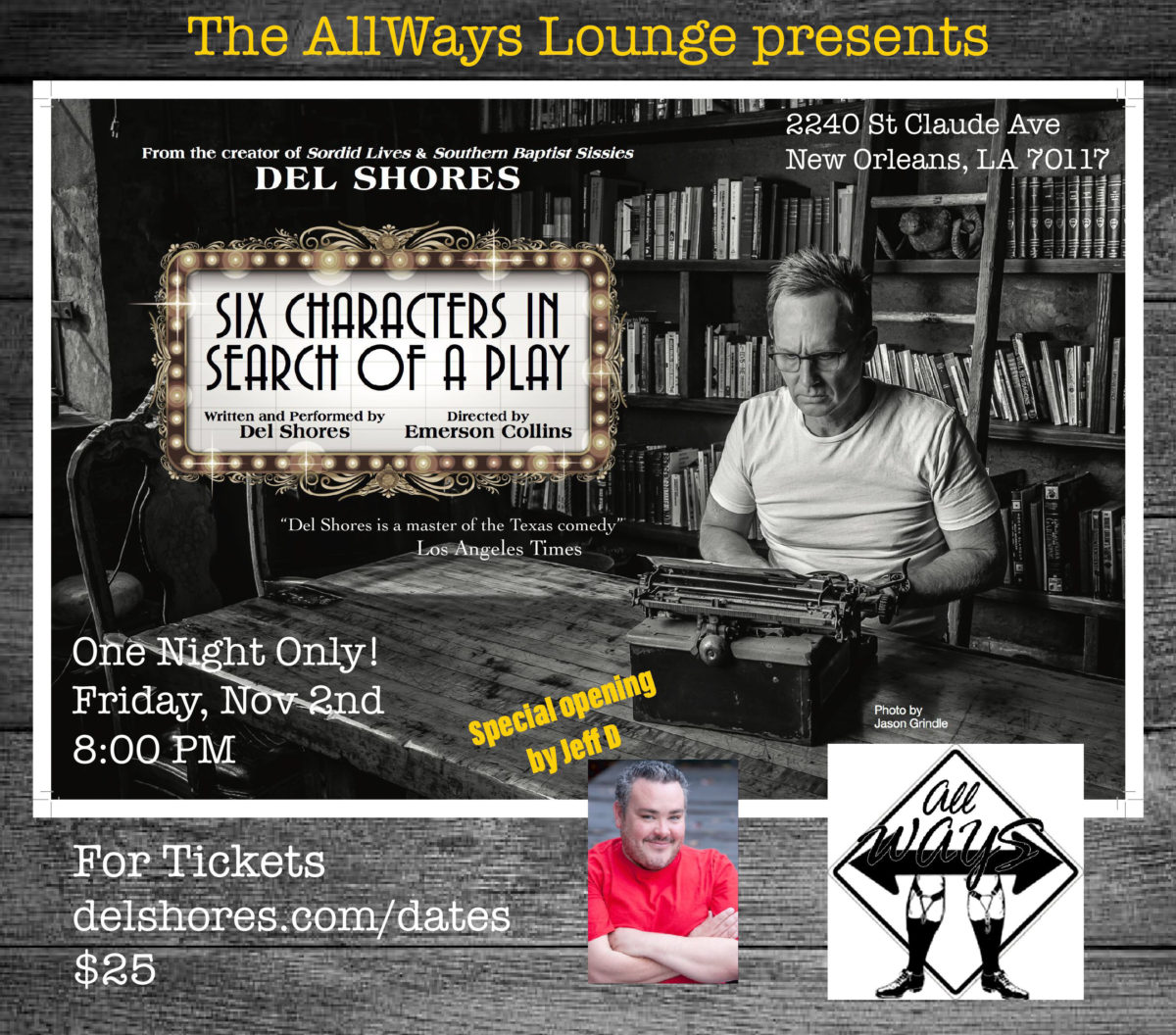