The Madwoman of Chaillot

Written in 1942, Madwoman invokes sinister strains of predatory capitalism — about the lust for oil, in a timely coincidence for this production — but it is ultimately a whimsical comedy about a Parisian socialite attempting to restore order to her corner of the world and peace for her neighbors. Madwoman won awards for “Best Original Score” and “Best Costume Design” at the 2011 Ambie Awards. Emilie Whelan was also nominated for best Director of a Comedy at the 2011 big Easy Awards. 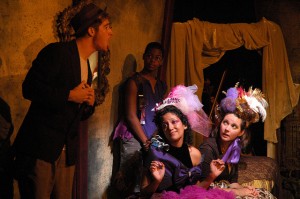 Gambit Weekly: Rags to Riches: The Madwoman of Chaillot

David Cuthbert: “A hit… the right play at the right time…”

The AllWays Lounge & Cabaret
It is our beautiful beloved bartender Jordan’s birthday weekend!! Tonight is the shift she is celebrating and we have a PACKED lineup! Come take in some stellar entertainment and get served in style by one of the best bartenders in the city.