Brecht & Weill’s Threepenny Opera follows the travails of the notorious criminal, Macheath, as he navigates a world of beggars, thieves, and prostitutes in Victorian London. With music deeply rooted in jazz and Viennese operetta, Weill’s provocative setting of Brecht’s gritty drama has enchanted audiences for the last century. A Cripple Creek/AllWays Lounge collaboration, Dennis Monn proved a magical pairing, as some of New Orleans’ most talented musicians, Walter McClements (Why are We Building Such a Big Ship, Panorama Jazz Band) and Aurora Nealand (Panorama Jazz Band,) joined an all-star cast to create an unforgettable evening of music and theatre. Threepenny won awards for “Best Musical Direction,” “Best Director of a Musical” and “Most Tattooed Cast” at the 2011 Ambie Awards.  Threepenny Opera was also nominated for 3 Big Easy Entertainment Awards including, Best Musical, Best Director of a Musical and Best Musical Direction. Dennis Monn, Harry Mayronne and Walter McClements all won awards in the directing categories. 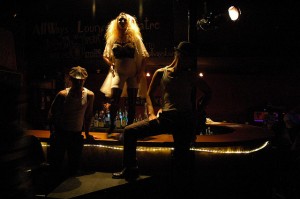 The AllWays Lounge & Cabaret
It is our beautiful beloved bartender Jordan’s birthday weekend!! Tonight is the shift she is celebrating and we have a PACKED lineup! Come take in some stellar entertainment and get served in style by one of the best bartenders in the city.